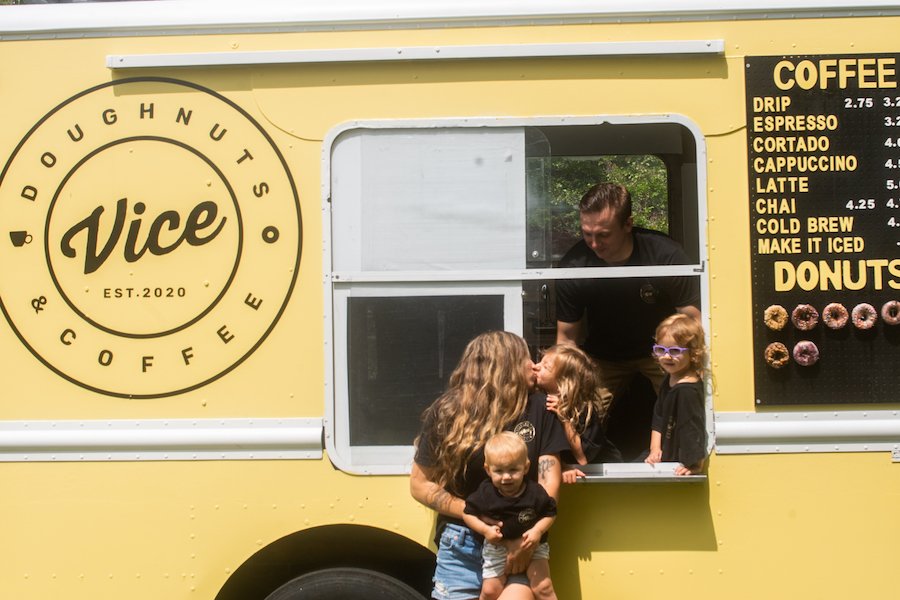 Gina and Joe O’Brien are teaming up with their neighbors, Ryan and Lauren Schneider, to satisfy those who crave one of life’s sweet “vices,” as is said.

Just like with the local ice cream man, Farmingdale residents young and old can soon find the bright yellow Vice Doughnuts and Coffee truck driving down their street.

The couple says all people have to do is keep an ear out for the truck’s distinct jingle.

“We’re really big fans of The Office, so if you listen to the jingle, the theme song is kind of in there,” Gina said.

Joe chimed in, saying, “This way, they know it’s the doughnut truck.”

The O’Briens said they have been working on the idea for about six or seven years.

Joe is a drill sergeant for the U.S. Army, and while on an eight-day deployment from Guantanamo Bay, he and Gina flew to Savannah, Ga.

There, while on a hunt for coffee that wasn’t Starbucks or Dunkin’ Donuts, they stopped into a place called The Coffee Fox, and after the first sip they were hooked.

Later, he was at the American Barista College in Portland, Ore., for a few weeks where he discovered the popular doughnut shop, Voodoo Doughnut.

That’s when it all clicked.

“He was like ‘Gina, doughnuts and coffee,’ we gotta do it,” Gina said.

Shortly after, the couple bought their first house, had their first daughter, Penelope, and had to pass up a few opportunities.

After losing his job around the height of the COVID-19 pandemic, the couple decided it was time to take the leap.

Vice Doughnuts and Coffee was born. They built it from an old ice cream truck. On board is an espresso machine to create various coffee drinks and shelves to display the doughnuts.

Gina is the executive chef behind the creations, which include flavors like the classic strawberry, chocolate, and vanilla frosted.

Also featured on the menu are more decadent options like banana cookie crumble, blueberry lemon glaze, and the “chubby hubby,” which is a cake doughnut with peanut butter chocolate fudge and salted caramel peanut brittle.

The more kid-friendly donut is “The Unicorn,” which is a vanilla cake doughnut with cotton candy crunchy bits and a big dollop of cotton candy puff on top.

There are gluten-free and vegan options too, because for Gina it was important to make a product she would feel comfortable feeding her three young daughters.

“When we were looking at options for ingredients, I couldn’t get behind putting red-dye number 4 and all that stuff, and while our doughnuts have sugar, they’re not low calorie, they are cleaner,” she said. “I source organically when possible, if we can’t, non-GMO at least.”

The coffee is from Southdown Coffee in Northport with teas from Clipper Ship Tea Company in Huntington and Northport, which is also veteran-owned and operated.

Cold foam is all the rage right now, so the truck owners offer a vegan cold-brew cold foam, as well as espresso, lattés, cappuccinos and other espresso-based drinks.

There are plenty of options for non-coffee lovers too. The O’Briens recommend their homemade half and half which is organic peach green tea, fresh-squeezed lemonade, and local honey.

Vice Doughnuts and Coffee truck will stay local to the Farmingdale area and drive around within a 10-mile radius. Check out their Instagram for daily updates on their location.

The Vice team also offer different event packages for occasions such as birthday parties and weddings.

Vice Doughnuts and Coffee is a representation of the team’s love for the sweet doughy treat that they want to share with other families in their community and beyond, they said.

“There are worse vices than doughnuts and coffee,” Ryan said.

All photos by Andrew Theodorakis of Yellow House Images.

Top: The O’Brien family standing outside of the new Vice truck.